Facts and data about doing business in Japan

Facts and data about doing business in Japan

JETRO, or the Japan External Trade Organization, is a government-related organization that works to promote mutual trade and investment between Japan and the rest of the world. Originally established in 1958 to promote Japanese exports abroad, JETRO's core focus in the 21st century has shifted toward promoting foreign direct investment into Japan and helping small to medium size Japanese firms maximize their global export potential.

JETRO issues an annual report regarding foreign direct investment (FDI) in Japan.
Below are some facts and data excerpt from the “JETRO Invest Japan Report 2018” and JETRO

The results of the survey (“Survey on Japan’s investment Climate” conducted by JETRO from May to June in 2018) show that foreign-affiliated companies perceive Japan as a highly profitable market. In addition, the results also highlighted the fact that, although companies felt that Japan’s greatest appeal lies in the large scale of its market, at the same time, they are also focusing on mid- to long-term growth in their business sectors, as well as business opportunities resulting from the fact that Japan is a frontrunner in addressing global challenges. 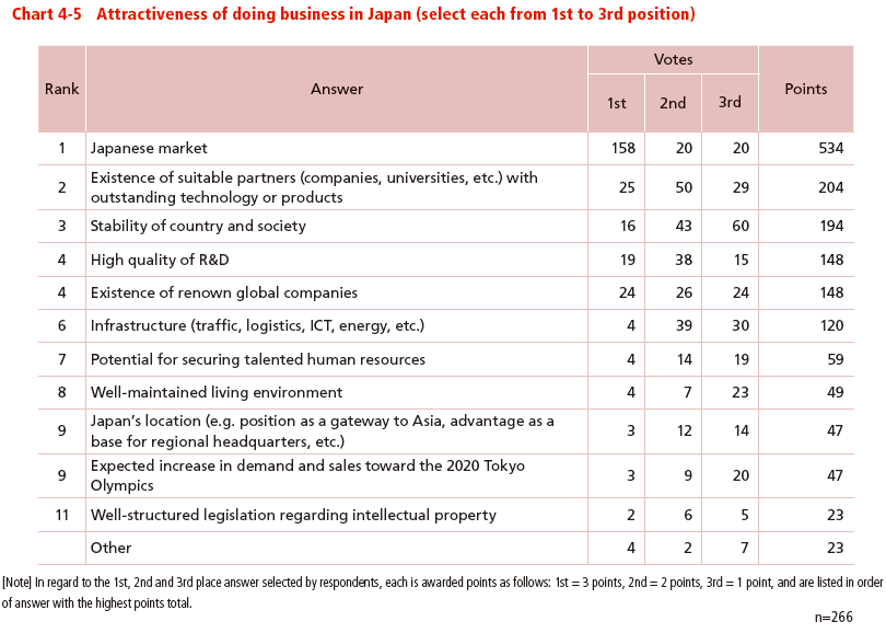 Fact3 Your potential partner, from start-ups to enterprise

In regard to specific partners for open innovation, interest in “Small and medium-sized Japanese enterprises” came out highest along with “Universities/research institutes” (Chart 4-17). Also, as mentioned previously, the “Existence of suitable partners (companies, universities, etc.) with outstanding technology or products” was the second most popular answer concerning the perceived attractiveness of doing business in Japan among foreign-affiliated companies. These results suggest that “suitable Japanese companies” in this case does not necessarily indicate major companies.
Rather than Japan’s major companies, foreign-affiliated companies are more interested in Japan’s SMEs, who possess outstanding technologies etc., as candidate partners for the creation of innovation. 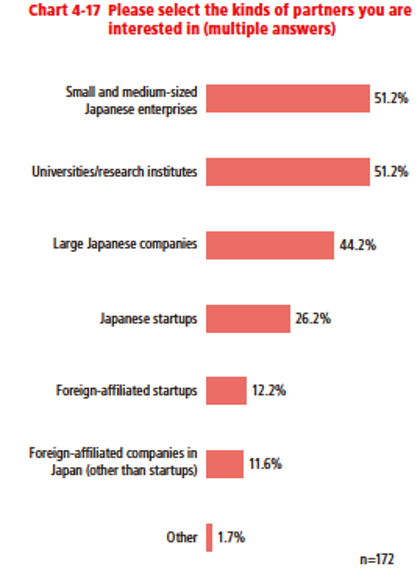 What are the obstacles?

In regard to “Complicated administrative procedures,” one of the top obstacles to doing business in Japan, many companies pointed to the “Excessive amount of required documents,” “Lack of English translation” and “Excessive amount of time required to complete procedures,” especially with “Tax matters,” “Labor matters” and “Matters related to status of residence (visas)” (Chart 4-23). As to why foreign-affiliated companies have given their relatively low appraisal of administrative procedures in Japan, it is possible that they tend to base their perspective on comparisons with their own countries’ systems and procedures, along with the fact that, in the 2000s, countries in Europe and North America carried out an extensive reduction in costs associated with administrative procedures along with the burden of paperwork.

In terms of providing English language versions of documents, this continues to be a pressing concern for foreign-affiliated companies, which includes administrative procedures, and is an area in which ongoing efforts need to be made to bring about improvements. For instance, “Difficulty in communicating in non-Japanese languages” occupies the top position in the list of obstacles to doing business in Japan, and “Lack of English translation” has also risen to the top as the biggest difficulty relating to regulations in Japan (Chart 4-24). 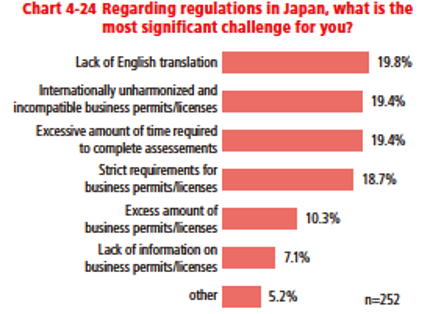 Are you interested in the uniqueness of doing business in Japan?
Here are some details for you to know.